This week the baby is the length of a banana, and one of the big progresses this week is the baby might open their eyes soon. 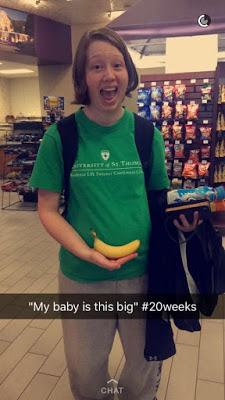 My appetite sure has grown. I usually eat a larger breakfast, then along with lunch and supper, I snack all day. By the way, Oreos are delicious.

I cry when I watch Star Wars, videos on Facebook of dogs or babies, and anything from Ellen Degeneres.

On Friday we find out if this little jumper is a boy or a girl. I’m so excited to have a name for this child.

I would say that now it is officially impossible to hide the bump. If I walk around campus, people who don’t know me might not notice and just think I’m a bit pudgy, but those who know me definitely see my weekly growing.

I feel like I have to pee all the time, particularly if I move from sitting to standing up, (and if someone kicks my bladder).

Feeling this little one kick is becoming a regular part of my day. I notice it best when I sit still for a long time. It feels like someone gently poking my tummy, but from the inside. It’s not as weird as it sounds. At first it felt like gas or me digesting. Now, it feels more like a “hi mom.” Before we go to bed, Peter will put his hand on my tummy and after a minute or two he usually feels some kicks. It’s so amazing seeing this awe on his face when the baby kicks or rolls over. Yesterday Peter and I were talking and the baby got really excited and I think it’s from him/her hearing us! I’m pretty sure the little one can recognize Peter and my voices now. 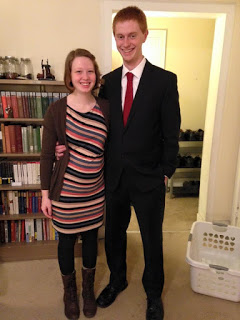 It’s been really comforting knowing that someone is always there with me, even though they have no idea what’s going on. I think it’s one of God’s ways of showing his love towards mothers. I’ve especially been reminded of this because it is Advent, and Mary too had a baby with her for nine months (who happened to be God).

In the last three days I watched all six Star Wars movies to be ready for Episode VII. I know episodes IV-VI pretty well, but I didn’t really remember I-III. Watching the original trilogy was fun because it’s been awhile and it reminded me of when I would watch them on VHS with my dad. The second Trilogy I really wanted to watch again because it has so much information in it.

I know most fans don’t like this newer series very much because it’s more info and less action, but I liked them a lot after watching them again this week. I remember seeing Episode I in theatre with my dad, particularly little Anakin in the pod-race. This one came out in 1999. (I was five.) I think I also saw Episode II in theatre with my dad, but I’m pretty sure I fell asleep and all I remember is seeing stars and a bunch of ships shooting at each other in space. That was in 2002. (I was seven.) The third came out in 2005 and I remember my dad going to see it, but I wasn’t as interested. I did watch it when I was 13 (I think), but I think it was such an information filled movie that I didn’t understand it.

I actually think I relate a lot to Anakin. He was really passionate as a boy and had a lot of potential. The Jedi felt the force in him was very strong in him even as a little boy, and after a blood test he tested higher than Yoda himself! So the point of the pod-race in Episode I was to win money to buy parts for a ship to get off the planet, but they also won in the bet to free little Anakin. So they took him in and Obi Wan trained him up to be a Jedi.

Now Anakin was very good at what he did, but he had a hard time with his emotions. This is where I think I relate. When I tried in school or volleyball or whatever, I was really good, but I had a lot holding me back. Anakin would have dreams of his mother dying and it distracted him from his training. He promised her that he would come back and free her when he was a Jedi.

So the important part about being a Jedi is controlling your feelings. Fear is actually something huge that Jedi are encouraged to not have. (Which reminds me of the 365 times the Bible says “Do not be afraid.”) Another part about being a Jedi was to not be attached to anything. (Which reminds me of priesthood and religious life, but in ways marriage and the Christian life in general as well.) Anakin definitely had an attachment to his mother, and also to Padme, who is pretty much one of the most beautiful people ever. So far, Anakin is basically failing at being a Jedi, except he’s so stinking good at using his light saber and moving things with the force, but he really needs to let go of his fear and attachments before he can become a Jedi.

When Anakin went to find his mom, he was successful and freed her, but when she saw him grown into a (good looking) man, she died at peace in his arms. He was so upset about her death, he lost it and actually killed everyone in the village. So this is where my being similar to Anakin disconnects and I don’t think I relate to him in wanting to kill everyone in sight, but I still used to (and still do) get very upset at times. I also used to have times when I would just lose it and get upset and either have a panic attack or not want to leave my room for a week, or both will happen.

In Honor of Finals Week

When I was first in college, particularly in my chemistry days, I felt a lot of pressure to do well. I felt like everyone I knew had a dad who was a doctor. I had to learn that it was okay that there were students who did unnaturally well in school. I used to get easily upset by it and think there was something wrong with me, yet in the classroom I followed along really well and asked really good questions. I learned that some people can naturally get six hours of sleep on a daily basis and be fine. I on the other hand would get very sick if I tried that too many days in a row. I need a solid 8 hours, more like 9 if I am able, and during my pregnancy realistically 10-12 hours. (Growing a baby takes a lot!)

So after my third chem class, second calc class, and first physics class, I called my chem major quits. I turned my Catholic Studies minor into a major (which was okay because I was really feeling called to do ministry), and I also picked up a philosophy minor on the way. Class can still be hard. I’m a slow reader but I still mostly got my work done and I was doing a lot better than I was in my science/math classes. Don’t get me wrong, I still nerd out and am still pretty good at math and science, but it’s not my calling.

With all the anxiety I was dealing with and the depression that just wasn’t going away, we found a medicine that helped a lot. As I’m getting older and am finishing my last year of school, I realize more and more how much college really doesn’t matter. I know the stats say that you need a degree to get a job, which is true most of the time. What’s also true is that if you work hard without a degree, you can have a job, you can pay the rent, and you can feed yourself and even your family. That’s what my family did. I grew up learning that it’s hard work, not skill, that pays off. In my psych class we had a section on education, and I learned that a difference between Japanese and American education is exactly that. The Japanese care more about how hard one works, not how skilled they naturally are. In that class I also learned that we tend to forget that there are other ways to have jobs and be “successful” besides by going to college.

For all my friends stressing about getting into med school and law school and other grad schools, it’s going to be okay. There are amazing doctors and other people in this world who do amazing things, and even failed a class or two. I could talk more about this but I will leave it here.

Down the road, five years from now, ten years from now, it won’t really matter. Do you even remember what grades you got in high school? You may remember in a nutshell, but do your friends or professors really care? Your boss in the future won’t really care either how you did in o-chem or ancient philosphy. What they care about is how well you are doing in the present moment. Jesus is like that too. He doesn’t care what sins you did in the past (or how virtuous you were in the past). What matters is whether you are living a virtuous life now.

So study hard, don’t panic, don’t lose too much sleep, eat healthy, love your friends and family, and be merry, because Jesus has a birthday coming up, and the only reason He was born was so that he can party with you in Heaven where there is no such things as finals.